For those of you who know me personally you may be aware of my love for great kit. Especially well thought-out, well designed kit. I will hopefully be writing a few posts about some of my favorite kit. I thought I would start here today with some amazing throwbags from wwtc.info.

Having attended an IRF instructor workshop last season I was introduced to these bags and straight away was very impressed with the way that someone had taken the time to really research a product  and get the design spot on. WWTC have 3 great bags 15m pro rescue, 18m classic & 27m boat bag.

Basically a throwbag is a length of floating rope stored in its own bag. How could anybody get this wrong ?. For me most whitewater companies simply produce a throwbag as an afterthought. Having traveled around quite a bit, thrown a few ropes and repacked plenty of them I can normally find a pitfall with most designs. Gaspar at WWTC  seems to have addressed most of the pitfalls and the end design is a sleek easy to use set of throwbags with some great design points.

Lets address the carry system first. How many times have you gone swimming down a rapid and watched your bag go floating past you? Or struggled to rethread the bag back onto its belt after use? All WWTC bags have their own carry system which is simply a housing system for your bag. Which is easy to get to when needed quickly and just as easy to pack the bag back into after a throw. 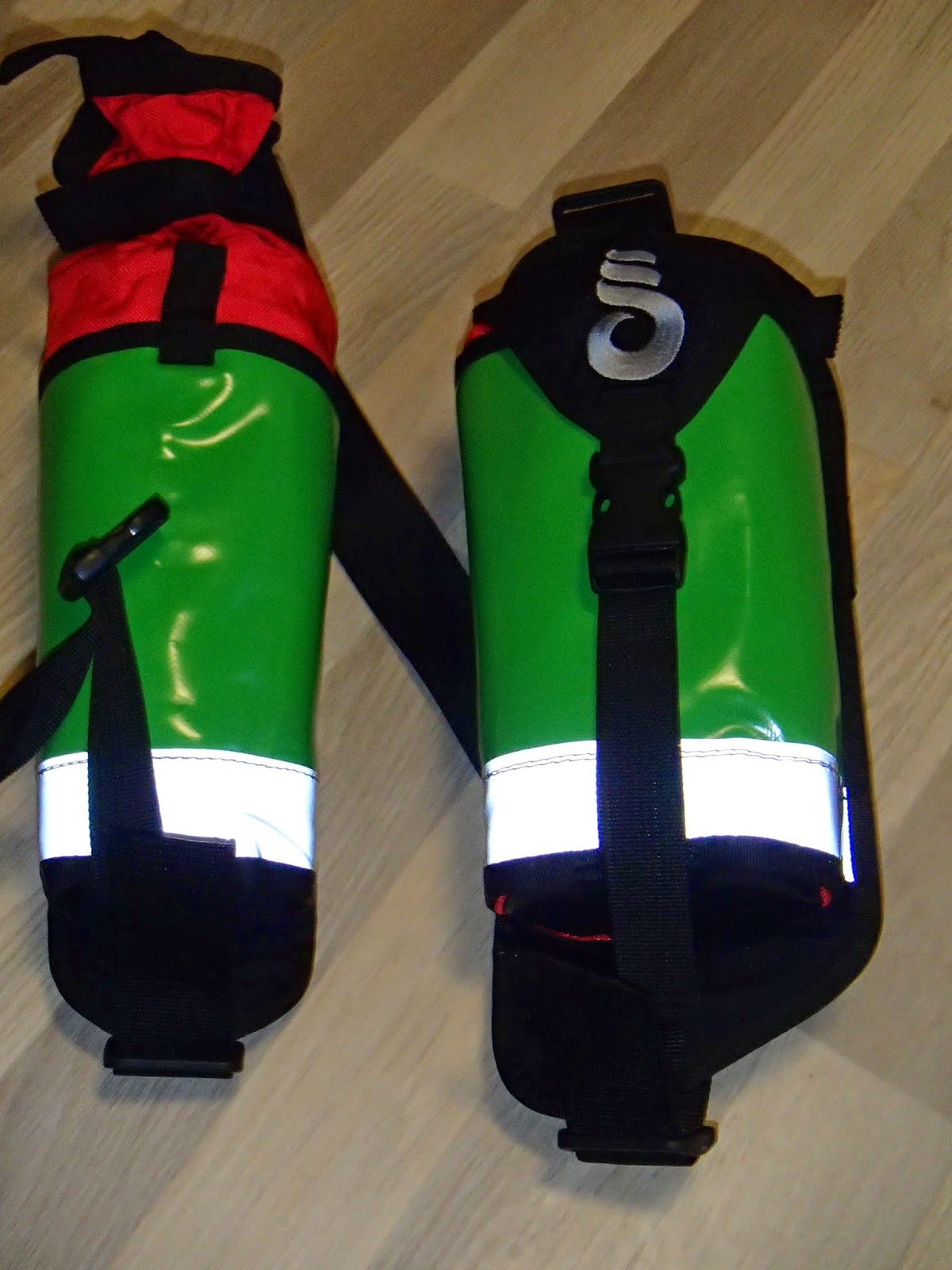 I remember watching to great horror a bag flying through the air with a carabiner attached to the end of the bag firmly planting its self into a friends face one day and the result was not pretty. The 18m & 27m bags have a padded carabiner pocket which allow you to permanently keep a carabiner stored in the bag. 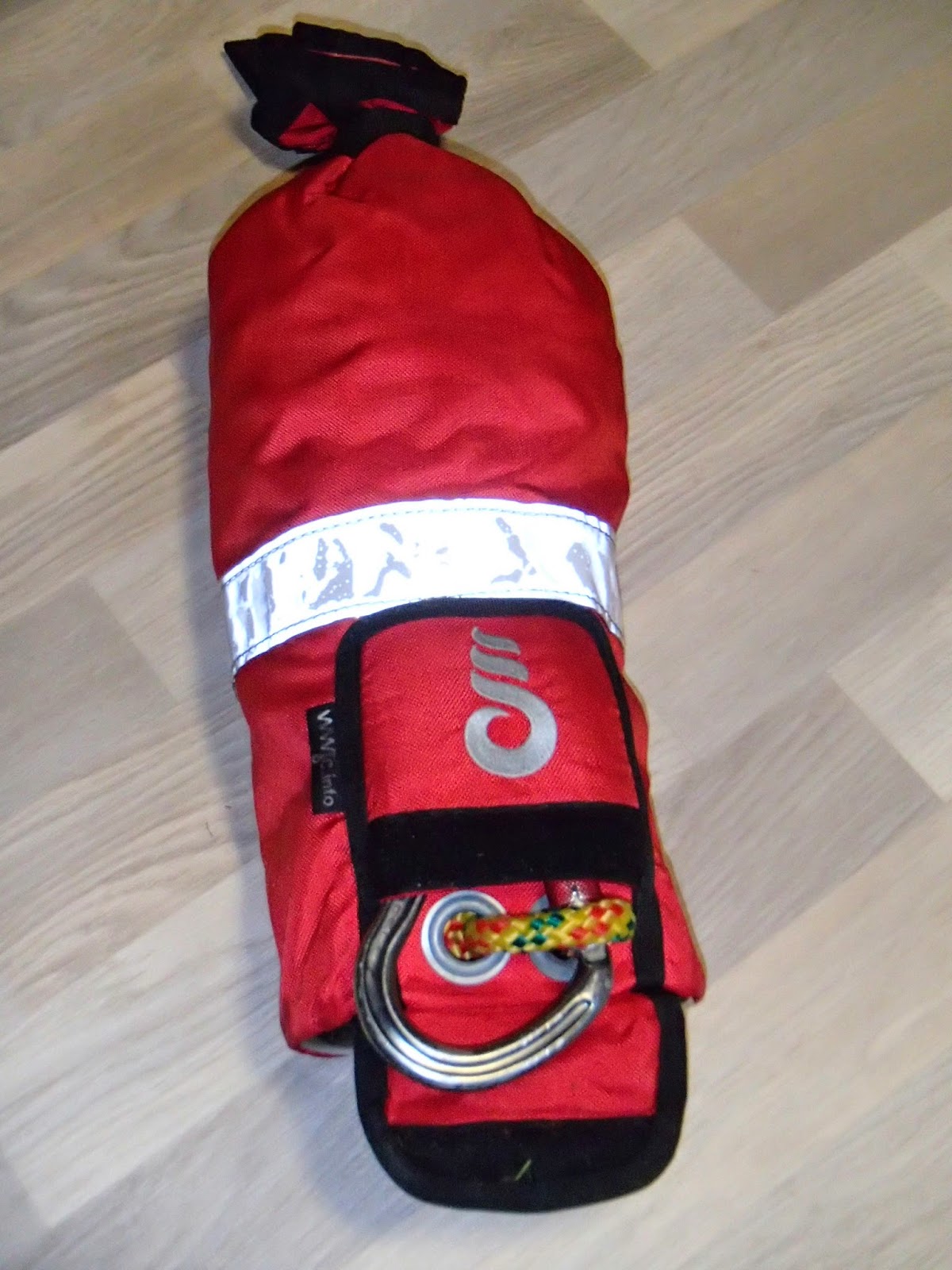 The over all design of the bag makes them truly easy to throw and easy to repack. The last thing I need when I am working is a bag that is a pain to repack. The bags when empty hold water really well which means they can be filled with water to aid the 2nd throw. The reflective band around the bag will surely help in any night situations.

An optional pocket can purchased and added to the waist belt that enables you to store flip lines, pulleys or prussics. The thing I love about the pocket is that it stays closed unlike some other bags where the pocket is forever opening and your kit falls out all over the show. The 27m boat bag even comes with its own carry system which will allow you too wear  it around the waist although this will make swimming harder but the beauty of the design means that it can be strapped around a cross tube so no need to worry about coming unpacked or clipped onto somewhere where it could become a hazard. 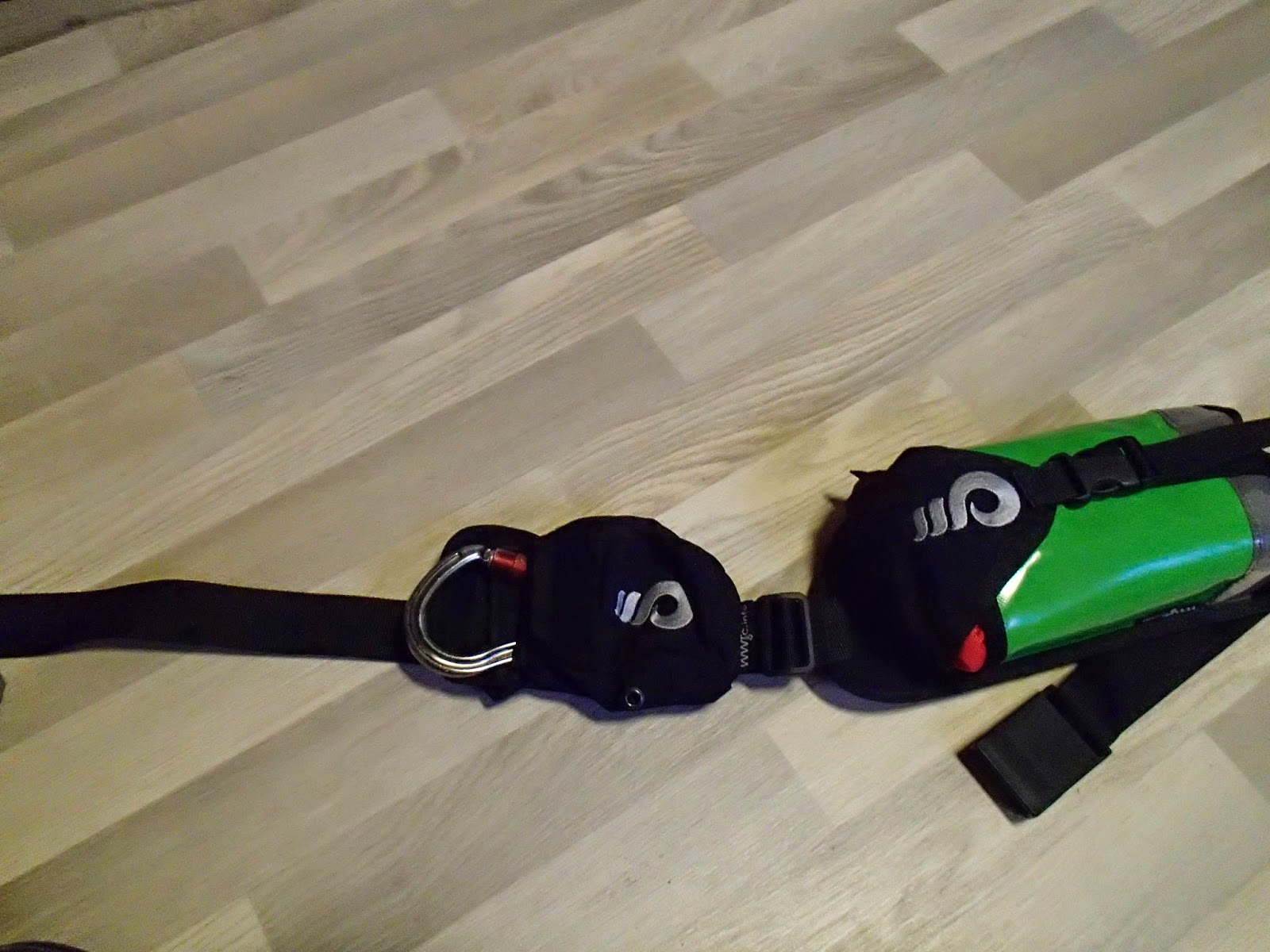 The most important thing for me a the end of the day is the quality of the rope. Gaspar has personally invested many hours researching the best combination of materials to produce a tough floating rope. Both the 15m & 18m bags have a 8mm rope with a unknotted tensile strength  of 10kn (1000kgs). The 27m boat bag has a 10mm rope with a whopping tensile strength of 17.5kn ( 1750kgs) 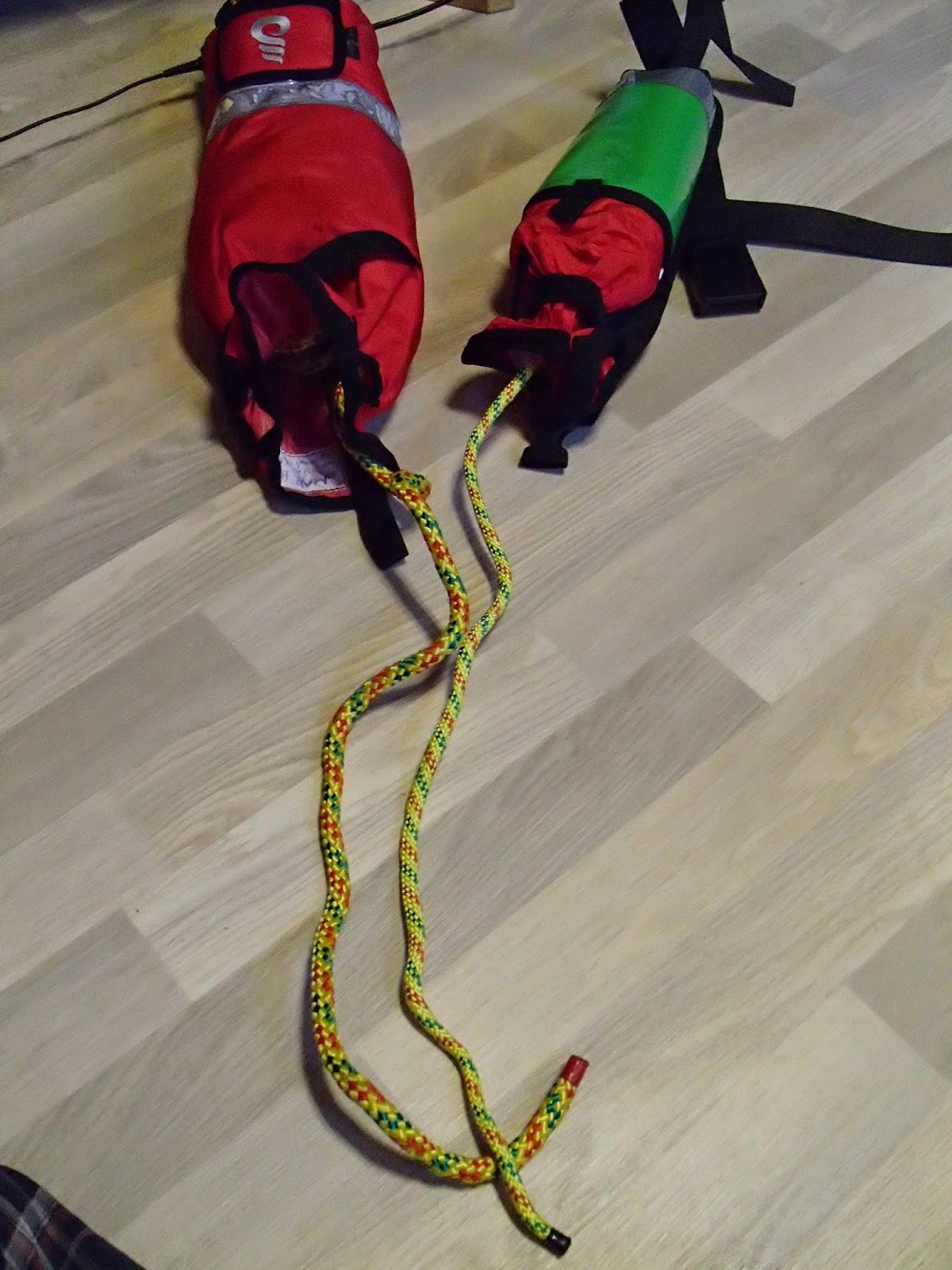 As I mentioned earlier these bags are functional and well designed and well made: pretty much a bag for life.

This is not a paid advertisement, but an honest review of good throwbags!

First course of the summer

On a not so warm Monday morning in Jerisjarvi quite a few kilometers inside the Arctic Circle. Harriniva Hotels & Safaris hosted the first ever International rafting federation guide training program on Finnish water. Hariniva were the very first rafting company established in Finland so it became fitting that they hosted the course. 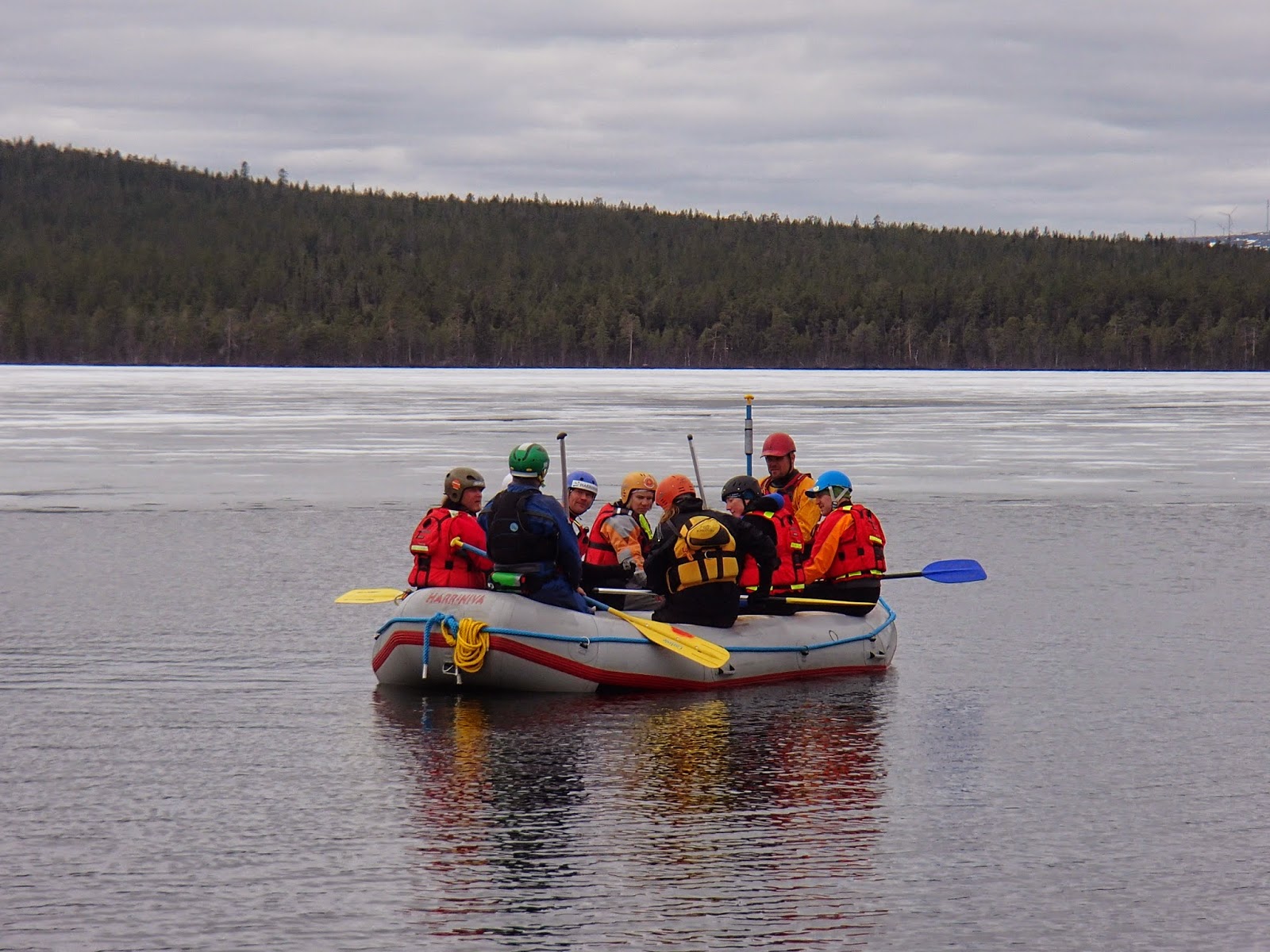 8 enthusiastic potential  guides from all corners of Finland attended the course. Finland has a popular raft racing culture but the commercial guiding scene is still developing. Monday kicked off with the normal introductions and registration. Once changed we spent a while shaping and discussing safety talks, then we took to the chilly waters of lake Jeris to practice some flat water paddling skills and commands.We were paddling on a 100 m stretch of ice free lake as the lake was still 90% frozen. After lunch we had a dry land throw bag introduction session followed by some practice throws on the water. We rounded the day off with swimmer rescues & flip drills. Harriniva had kindly given us the use of there water side sauna to use so that we could warm up after our swimming and flip drills. The perfect place to review the days activities . 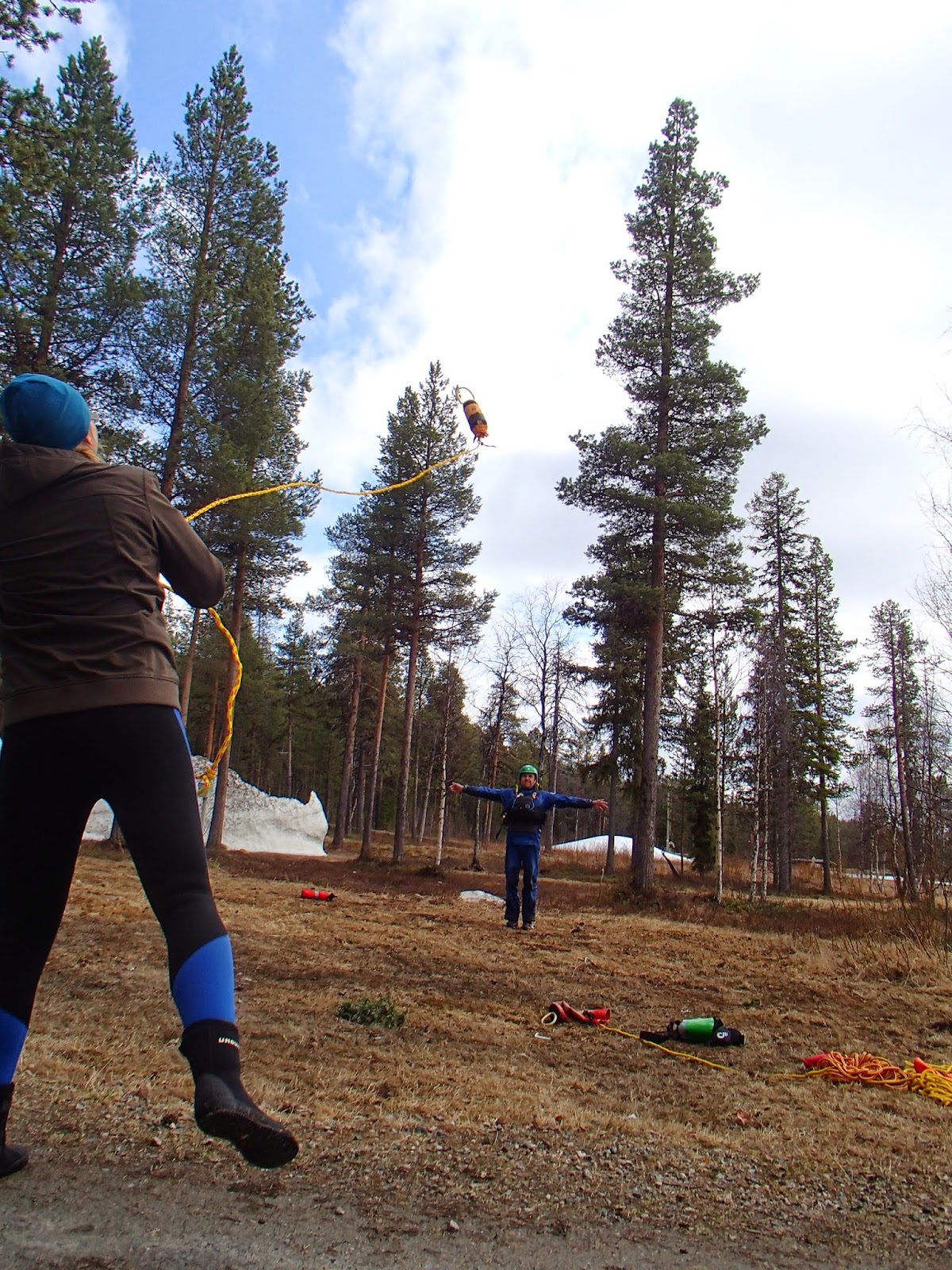 Outi dialing in on her dry land throw bag skills. We also spent some time looking at the various re throwing techniques with the new TRU technique becoming a firm favorite. 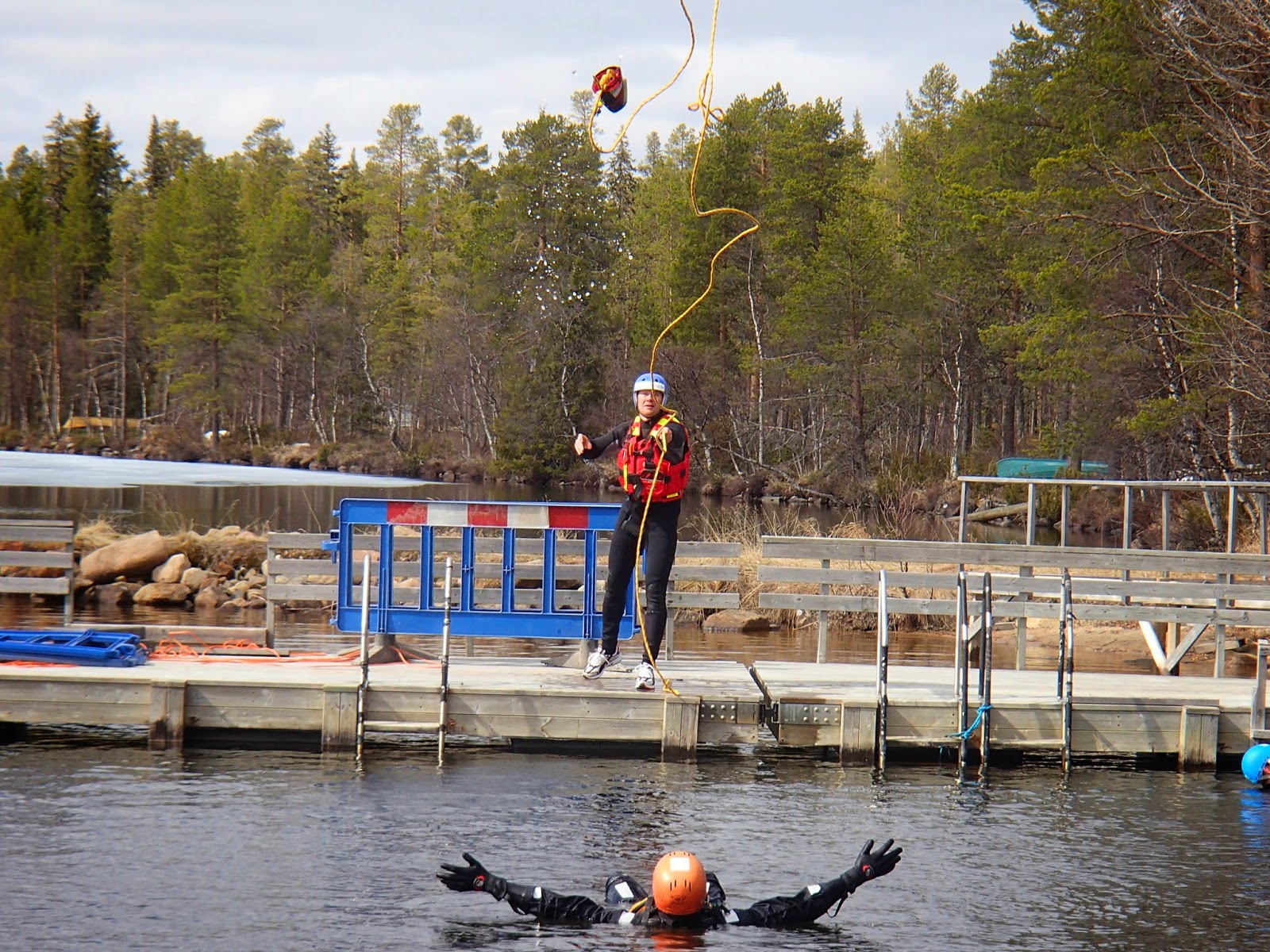 Ari with a text book throw. 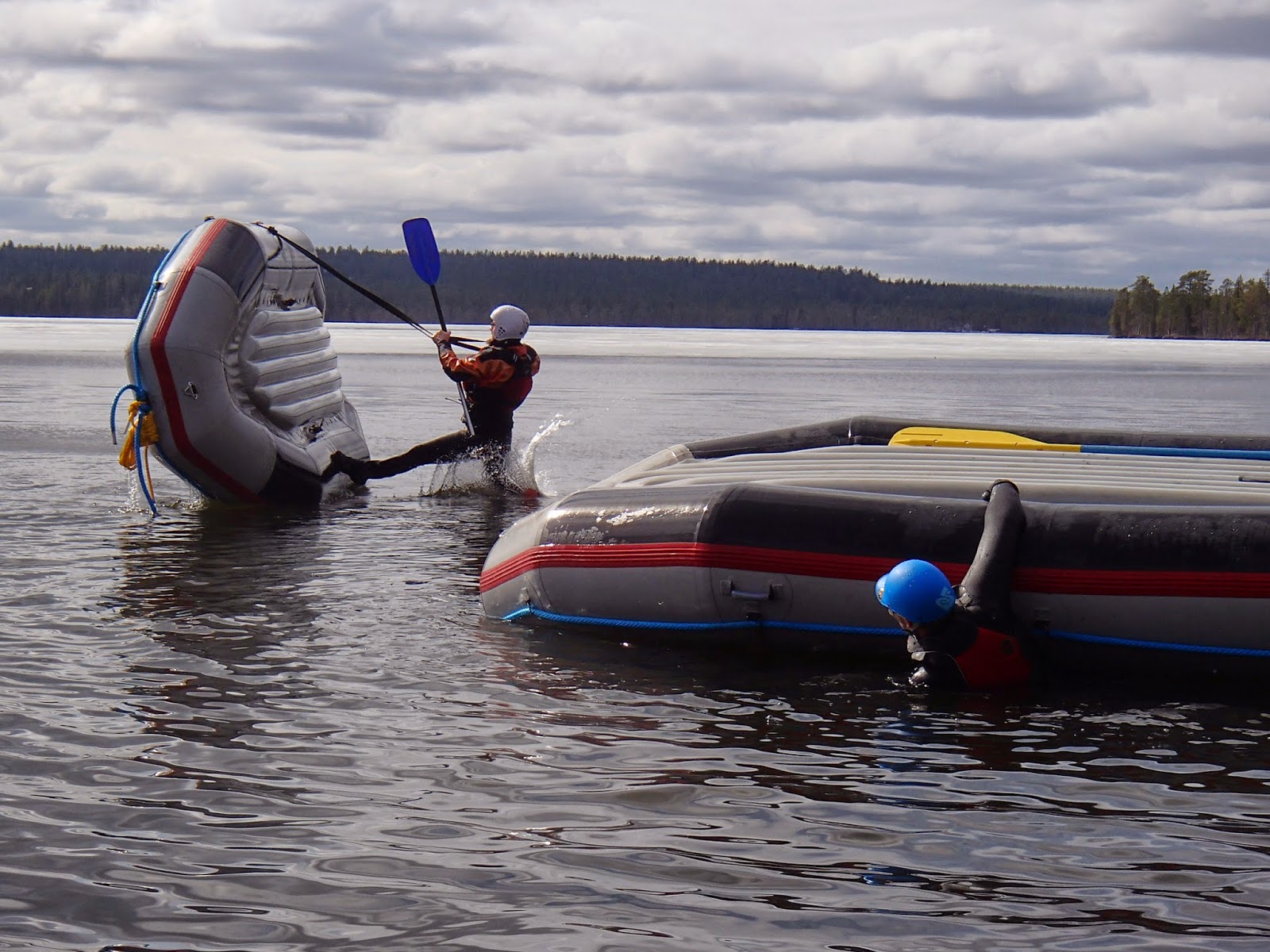 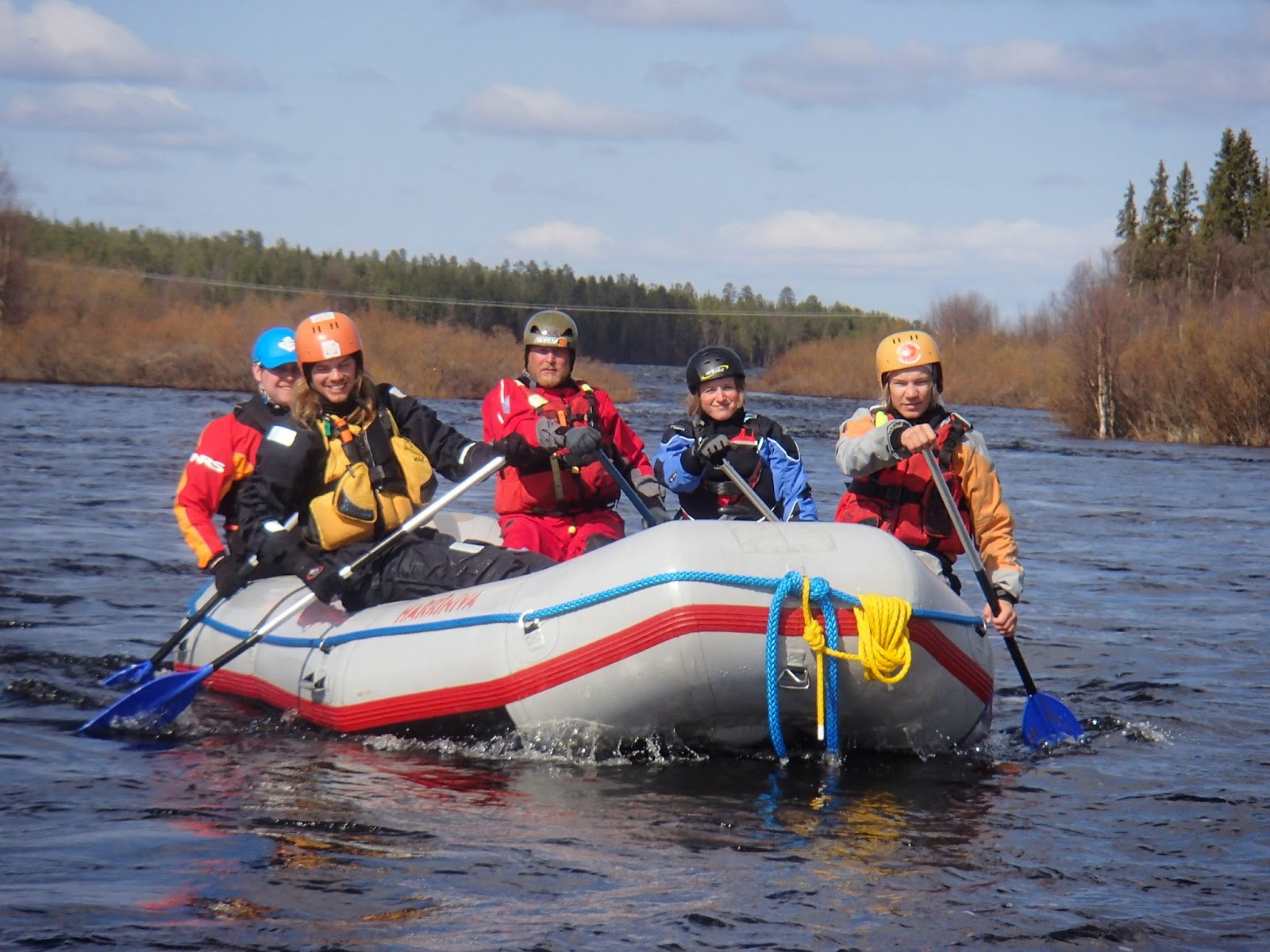 Day 2 started with a small ropework test from the previous nights homework. I also had the opportunity to learn the Finnish names for some of the knots. This became a 2 way learning session which was great. After a hydrology session we took to the water. Our course dates had been planned perfectly as the Muonio river had reach peak springtime flows of around 1000 cumecs. The Muonio river forms the most peaceful boarder in the world between Sweden & Finland. The Muonio river is also Europe's longest free flowing river & an excellent fishing river. 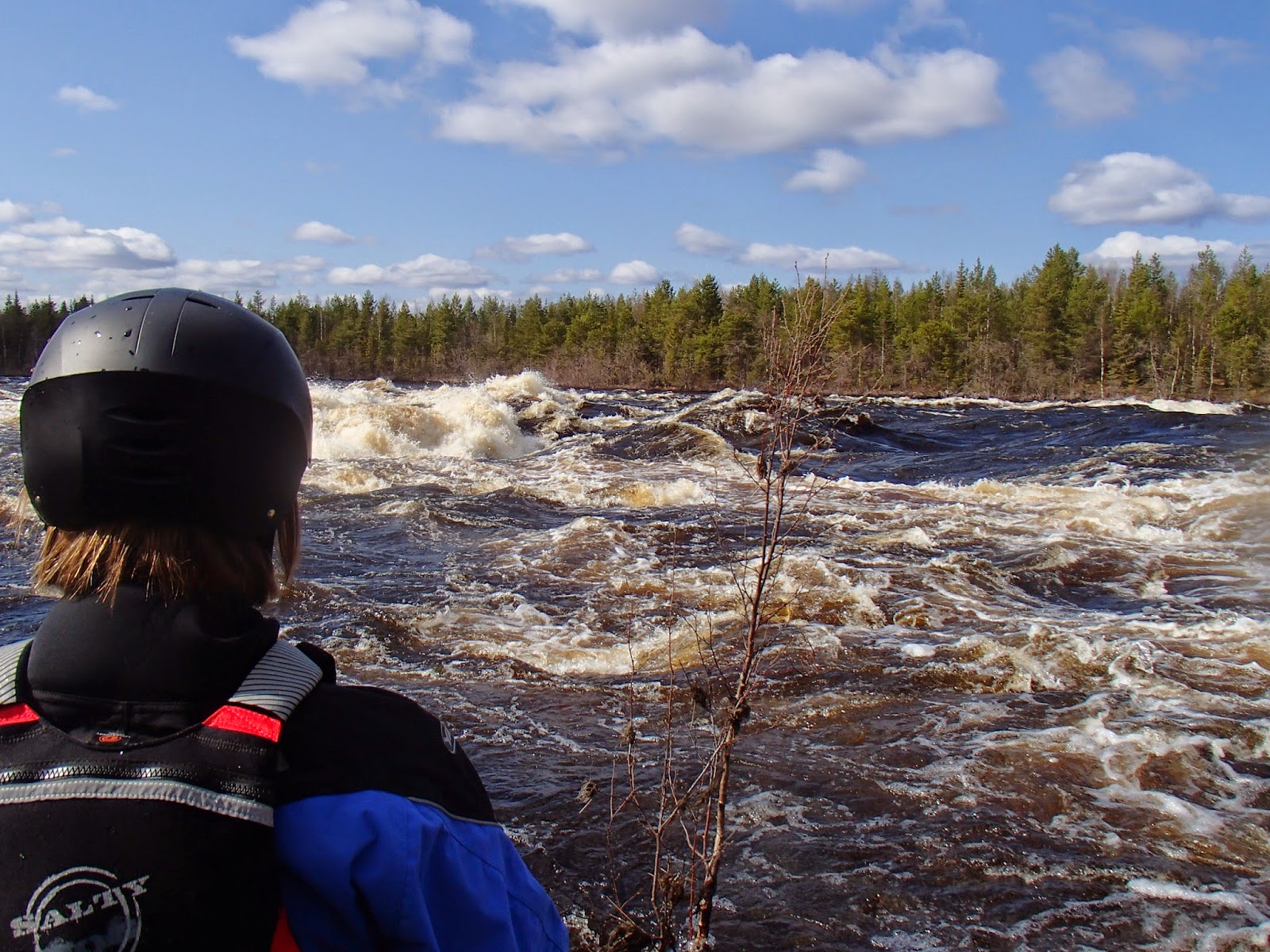 The commercial section of river that we were using was an excellent run for our guides. 6km of big volume bouncy class 2-3 rapids. We honed our basic skills on some of the more easier sections of the river before laying siege to the mighty Saarikoski rapid. The locals have a healthy respect for this rapid a huge river wide wave train. The guardian wave was around the 3- 4 meter height with a nice tasty flushy hole behind it.We cautiously ran a few chicken shoots and spent time discussing our lines and back up plans should it turn out in a flip. I wanted the team to be absolutely relaxed and happy swimming in big water before we tackled Saarikoski so we moved downstream to practice our swimming skills. Saarikoski mainline would have to wait until day 3. 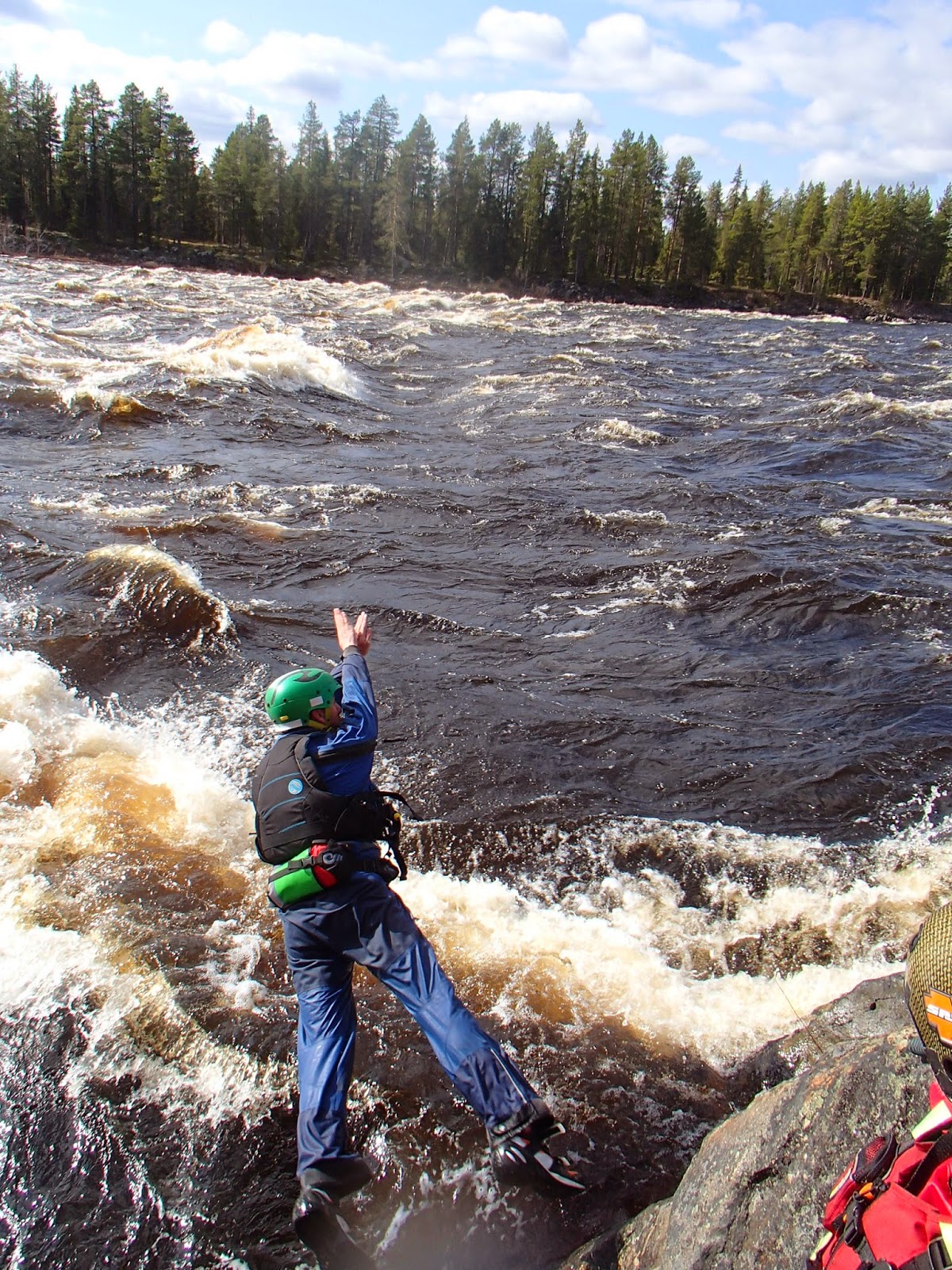 Me leading the way on a practice swim. The weather was improving to around 20c with amazing sunshine. 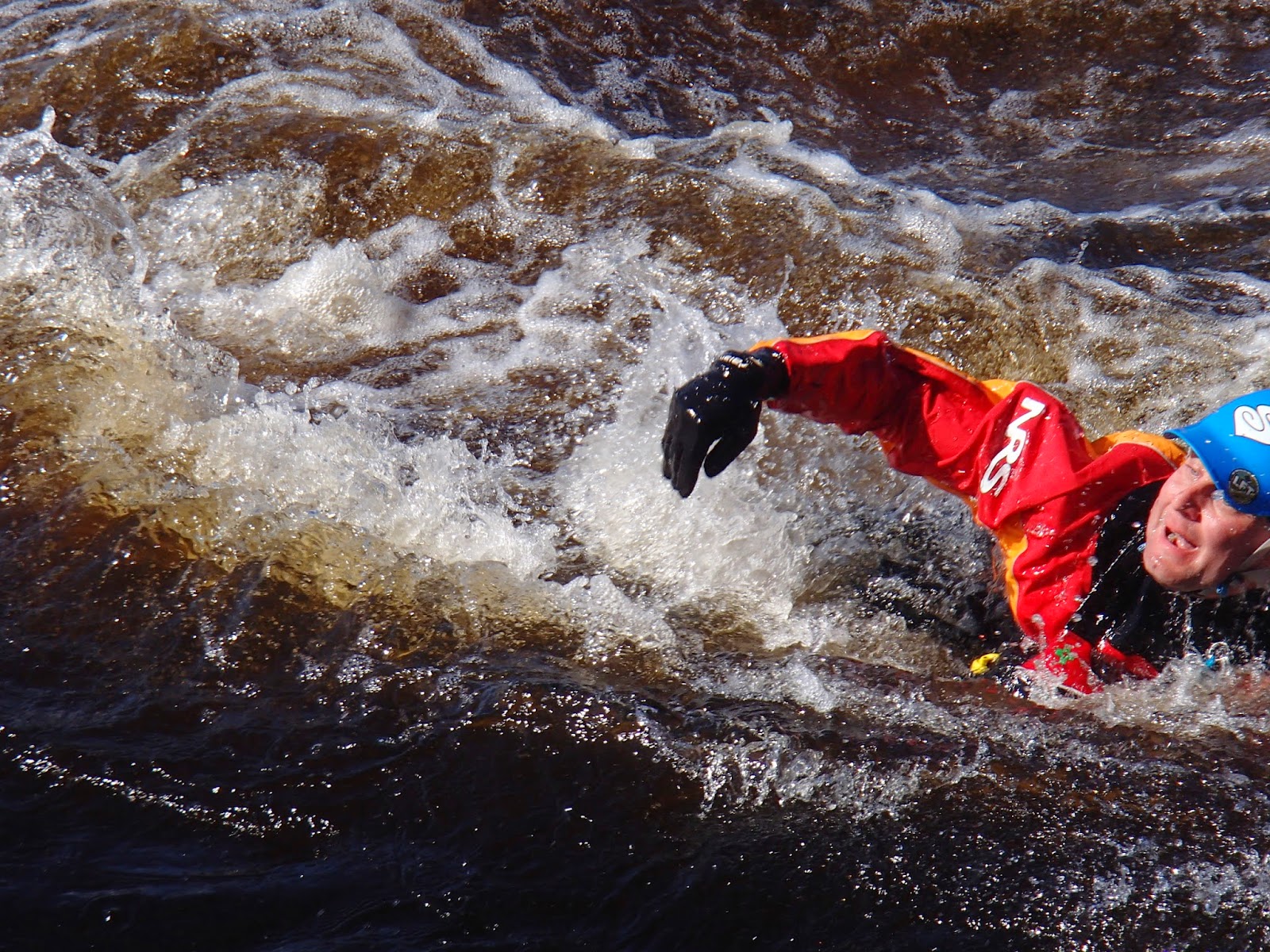 Day 3 started with the excitement of tackling the Saarikoski main line. The team had scouted the rapid on numerous occasions and were primed and ready to. Having the opportunity to sit back and watch the team make their own decisions and come up with a safety plan was very rewarding to watch. Big smiles and cheers we had when we successfully ran Saarikoski. Throughout day 3 we managed another 6 clean lines.

Day 4 was dedicated to whitewater rescue skills. The morning session we practiced our dry land wrap drills and learned some basic mechanical advantage systems. After lunch we moved onto a small tributary of the Muonio river. The tributary flowed straight through the center of the Muonio town so the local public had an afternoons entertainment on their doorstep. We practiced 2&4 point raft tethers along with live bait rescues along with shallow water crossings . We finished the day off  with setting up a tensioned diagonal. During the evening we also had the chance to follow and observe a full commercial trip. I ended up guiding one raft. Little known to me my raft was full of celebrities including Ms Finland 2013, a very close line was had in the Saarikoski rapid for the benefit of the tv cameras. 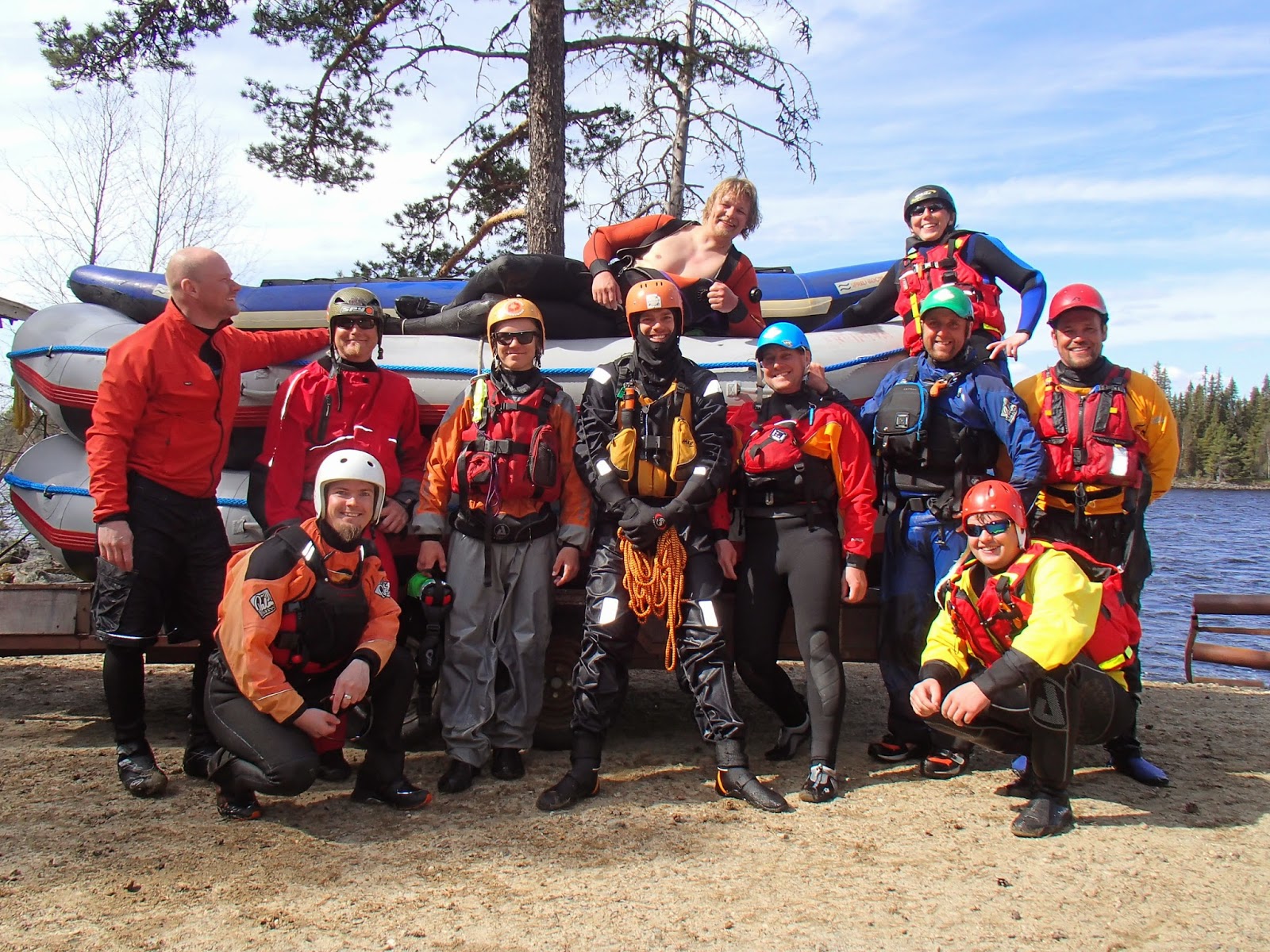 Day 5 Was a chance to tidy up some loose ends and give the group the chance to practice anything they had not gotten to grips with. For some reason they all wanted to run a flip scenario in a big rapid. Saarikoski was chosen and executed in a swift manner.Our final afternoon consisted of admin followed by a well earned BBQ and a few beers. So many thanks to Harriniva and most of all Bjorn, Henri, Hessu, Outi, Marko, Ari, Jere, Joonas, Kalle for a highly enjoyable week.

Mark
Posted by Mark Hirst at 14:51 No comments: