Training with the maidens of the Arctic

During the summer period each year the Suomi cup attracts teams mainly from the Arctic region of Northern Finland to enjoy a race series throughout the short summer. The series of races are normally dominated by 2 teams, the mens team from the town of Muonio and the ladies Routa rafting team from Rovaniemi.

Routa were fresh back from an early season outing to the European cup race in Bosnia where they finished in an encouraging 7th place. This was a good result considering that none of the rivers in Lapland are possible to paddle until early May as they are all still frozen. For most of the team this was their first time in a raft this season. During the race the team were inspired by the performance of the Czech ladies team.

On returning from the European cup the Routa ladies team continued with their success by winning the ladies race in the next race of the Suomi cup series back at home in Finland by a convincing margin.

The following Monday from the race I was lucky enough to be invited to work with the team on a 2 day training camp in their home town of Rovaniemi. Toini, a member of the team, had contacted me to ask if I would come and help coach the team for 2 days and see if there were anyways in which I could improve there performance. I was honored.

The turn out was perfect. We had 6 paddlers which meant I could coach from my kayak this enabled me to observe the team really well.

Before we got on the water we had a discussion about the aims of the team and what they wanted to get out of the 2 day workshop. All of the team explained what each of them wanted. The reoccurring theme was a desire to improve there performance and be able to compete with the top European female teams, in particular the female Czech team. 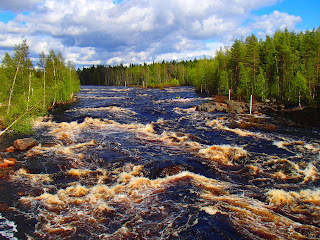 With the objectives of the team clear in my head I could now start to plan the workshop in fine detail.
We took to the water for a paddling warm up, straight away I noticed 2 really positive signs

1. Power & technique
The team had bags of power and technique. We were paddling on the flat water of a lake and they were keeping up with me in my kayak.

2. Communication & Discipline
The Ladies had really good discipline and the communication lines were wide open.

With a nervous smile on my face I sat back in my kayak and though to myself it's going to be a long 2 days where can I help this team, they are better paddlers than me.

Pushing the negative thoughts aside we started to look into the fine details of  the forward paddling technique. This started a discussion based on how many strokes were needed to reach top speed. We really slowed things down and took an in depth look at the sprint start and manged to compare the start of a raft sprint to the start of a 100m athletics sprint. 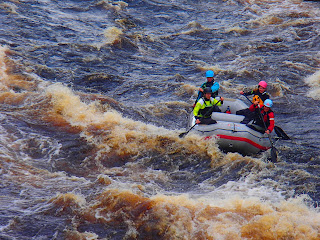 We moved onto the water and really started to break down every aspect of the teams performance when entering and exiting eddies. We tried different approaches and experimented. I slowly started to notice that the team were coaching each other, I was simply facilitating the session. This allowed me to observe the team and give back some useful feedback.

We moved downstream to the Vikakongas slalom site. As it was still early in the season we still had plenty of water which was great. We decided that on day 2 we would base ourselves at the site and really work on the slalom aspect of the teams performance.

We paddled down the remaining sections of the river experimenting with aspects of the teams performance and technique when ferry gliding and running rapids. To make life more challenging I gave the team tasks such as blind paddling & paddling without talking. The team were surprised at how well  they managed to complete the tasks and realized that they had a really good team work ethic already in place.

Day 2 started with a few tired looking faces and some achy joints including mine. Day 1 had been a heavy day. We slowly warmed up and were ready for more action. As previously agreed we decided to base ourselves at the slalom site. I set the team and demanding set of gates to achieve.

I then took one member of the team away on each run so that they could observe and evaluate the run in order to improve the performance on the next run. This worked really well. 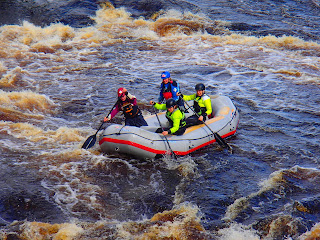 What started out as a pretty hard series of gates to make now started to become achievable and by the end of day 2 the team were making the gates with ease and starting to style the course which was encouraging. We also used a little bit of video coaching analysis which worked well.

We took some time at the end of day 2 to look at flip drills. None of the commercial companies in Finland operate on water above class 3, therefore flipping very rarely occurs to the point where flip drills are never taught or rehearsed.

We looked at the finger reflip technique. Instead of using the traditional technique of 1 person climbing on top of the up turned raft. we used 3 members of the team to quickly reflip the raft from the water. This technique was warmly accepted. 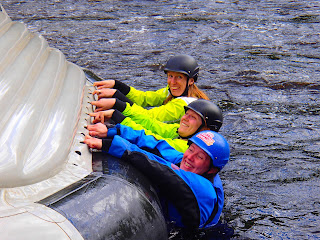 Once changed we discussed the outcomes of the workshop and agreed on specific training targets for future sessions. This was all fed back to the team with a wrap up email.
Mark. 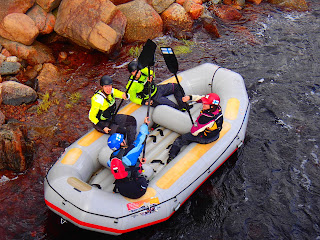