Rafting on the roof of the world. An IRF Instructor workshop at 3500M In the Indian Himalaya 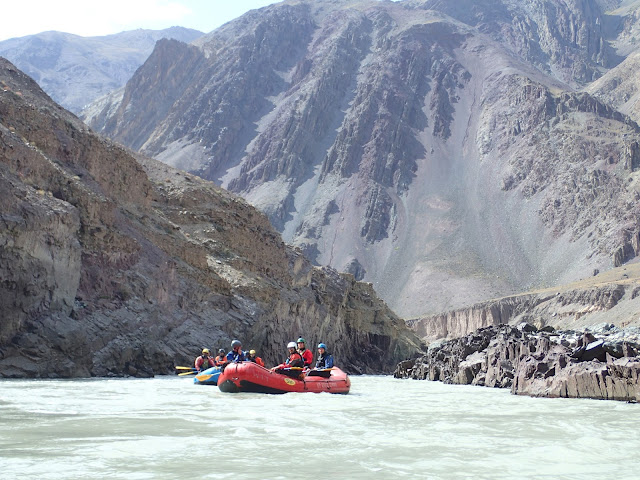 As I walked down the steps on to the Tarmac at Leh airport that familiar feeling of been short breath as  the altitude hit me. This weeks 7 day  international rafting Federation  workshop was to be based at the base camp of Wet N wild explorations in Nimoo at the altitude of 3500M above sea level on the banks of in lower Indus & Zanskar rivers.

First off there is very little humidity due to the altitude 3500M. So expect your lips & skin to start drying immediately.

Second: Ladakh is the sunniest state in India. The Sun in Ladakh is harsh and brutal (My hands  look like they aged 40 years since my last post. We were going to spend 7 days on the water so the sun is intensified by the waters reflection.

Third: The altitude of 3500m affects you. The thin mountain air make the simplest of tasks become breathless ordeal. Standing up quickly or bending down to tie your shoelaces can leave you breathless & dizzy. I have often experienced waking up at night out of breath with a short feeling of suffocation.

This was to be my third trip to the area. I knew that the students on the course were in for a shock.

I had been planning this workshop since February. 7 Months later we were almost ready for the off. The students had started to arrive in the camp. This workshop had a true international flavor. The course was made of  a team of guide who had travelled  from the following countries.
India, Bosnia, UK, Spain, Russia, Argentina,
The workshop was to be run by myself from the UK & Gaspar from Hungry.
This workshop was going to a mixture of global experience. Secretly I could not wait to let the action begin.

As I have mentioned many times before it is very rare that a guide can present themselves for an IRF assessment  and be polished in all areas of raft guiding. As per the popular trend for this year  I had combined the first 3 days of the workshop with Rescue 3 Europe Whitewater rescue technician Professional certificate (WRT PRO)

The first 3days of the course were gong to be spent looking at the whitewater rescue skills of the guides and preparing them for the final 4 days of assessment on the course. The WRT gave the guides a chance to update or lean new rescue skills. The WRT also played another silent role. It was allowing the guides to work together as a team and create a working relationship that would help them during the IRF trip leader emergency scenarios.

We based the first 2 days of the WRT on the rapid next to the Wet & Wild explorations a 100m long big volume class 3 rapid  on the lower Indus river. We kicked off the first morning in the classroom discussing the Rescue 3 philosophy & rescue theory along with communications & personal equipment.

We ventured out on to the water to look at whitewater swimming technique. I could hear the guides quietly laughing at me when I gave them a very simple 70M class 2 swim. The laughs were soon gone when the students realized how cold the water was. Each of the students completed the swim the local Indian guides were shivering due to the lack of quality PPE (personal protective equipment) available to them. The International guides mostly had drysuits but were gasping for breath as the altitude was teaching them a lesson.

The learnings from the mornings theory lesson were starting to ring home. When working in whitewater at altitude the Self, Team, Victim,  rescue  priorities were ringing big loud bells.
We continued through the next 2 days working through the WRT syllabus.
We completed day one with a basic ropework session looking at the knots needed for river use. 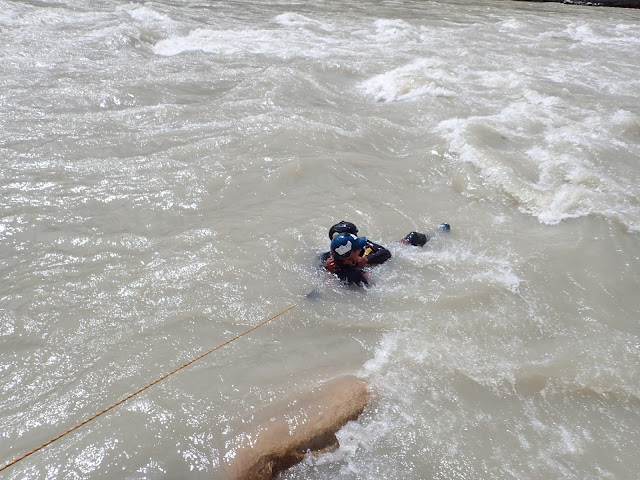 Day 2 started with shallow water work and some rescue scenarios. We spent the afternoon looking at pinned boats and mechanical advantage. The team were really starting to gel together now. The instructor candidates were starting to show there experience coaching the less experienced students on Mechanical advantage and ropework skills
On the evening of day 2 we looked at night operations. We discussed search theory along with night rescue operations. I then set up a night search scenario  by hiding some willing volunteers around and in the river all of the first 2 days learnings were put into practice. After the search exercise we focused throwbag exercises in the dark.

The final day of the WRT was spent looking at the use of a raft in a rescue along with tensioned diagonals. All of the students were now qualified Rescue 3 Whitewater Rescue Technicians.

Day 4 was the first day of the 4 day IRF workshop. Gaspar had joined me as the numbers were high we had 11 students ranging from instructor candidates through too 1st year guides. Gaspar was also observing how I delivered the workshop as I myself am working through the pathway to become an IRF assessor.

The first morning  was spent assessing the throwbag & flip drills. I had already assessed the swimming & ropework skills during the WRT section beforehand. Both myself & Gaspar set up 2 work stations I ran the flip station & Gaspar ran the throwbag station. This way we were both able to keep all of the students active. All of the foreign student mentioned that the flatwater standard IRF flip drill was a challenge at this altitude.


During the afternoon of day 3 we looked at the use of a kayak in a raft operation as we focused on the safety craft assessments. The non kayaking students got to spend some extra stick time coaching with Gaspar whilst I put the safety kayakers through there paces. We looked at dealing with multiple & panicked swimmers. The students also go to look at how to deal with unconscious swimmers from a kayak. the students also got to experiment with taking control of a guileless raft they practiced using vocal commands along with manipulating the rafts position with there kayaks and ultimately exiting there kayaks into a raft to take control
of the situation. 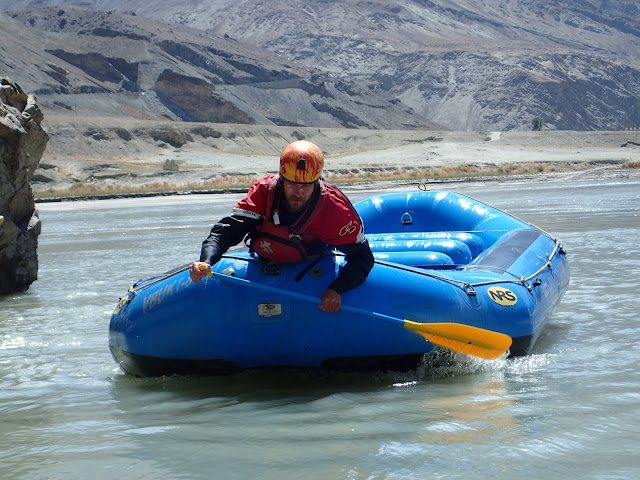 Days 5 & & were spent based on the Lardo class 4 rapid on the big volume  lower Indus river. Lard was also the venue for the recent High altitude ladakh river festival. Lardo is a 200m Big volume class 4 rapid with multiple lines each with interesting consequences if the line is missed. The next 2 days were going to be spent looking at class 4 rafting skills and trip leader emergency scenarios. It was interesting to watch the guides step up when we asked who wanted to guide lardo first. Once the lines had been run a few times confidence levels raised amoungst the students. 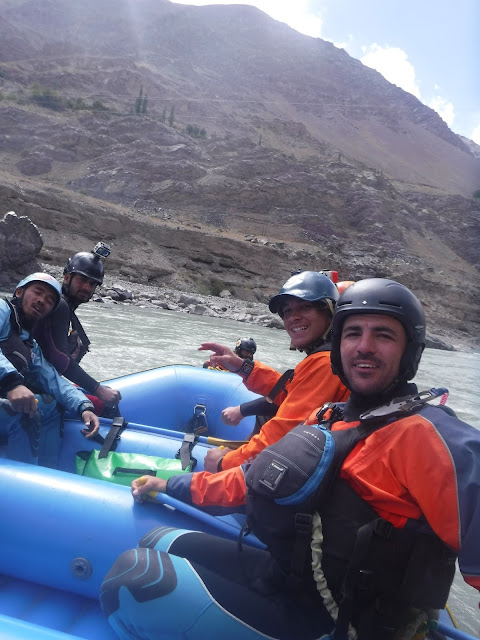 Both myself and Gaspar agreed that we wanted to have a large element of practical rafting skills included in the TL scenarios as any potential scenarios on lardo would be dynamic in nature and would involve customers / victims spread out over a large area. We took turns to set up an assess each scenario. we had 2 days to  run 9 trip leader scenarios. Each scenario had complex issues which were both fun to set up and a learning experience for the students.
Some of the subjects covered in the scenarios were.
The Students did really good jobs in managing the scenarios. The key learning points were.
Once a emergency scenario has been dealt with a good trip leader should debrief the whole team quickly to re gain group control and re motivate the customers. 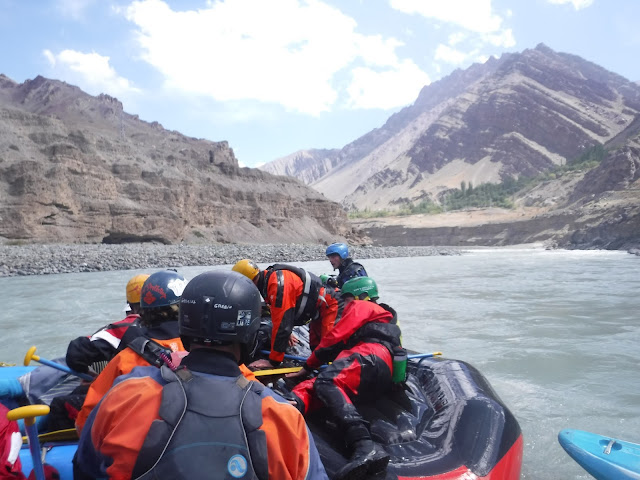 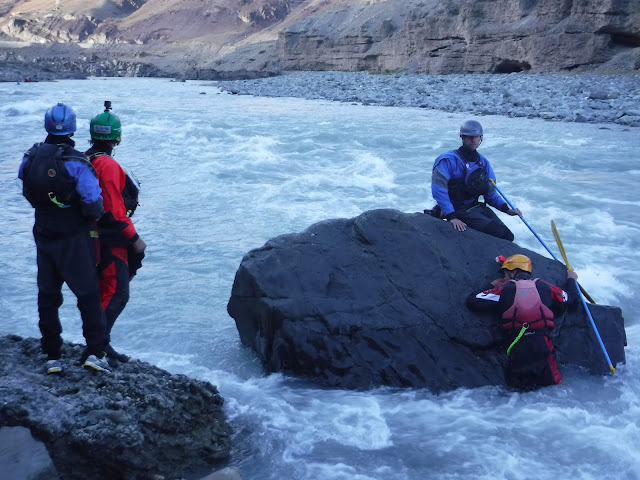 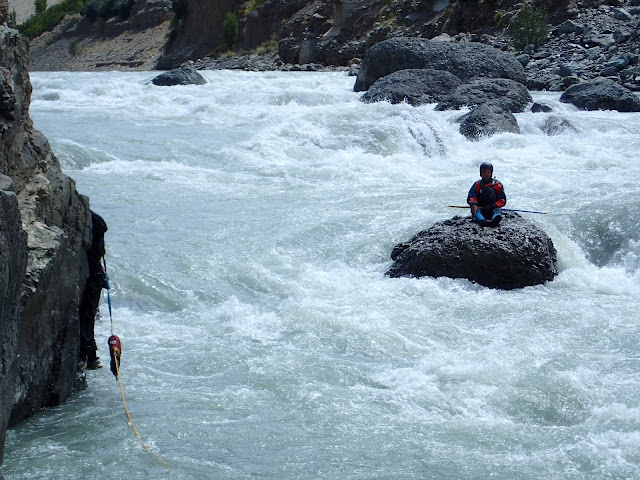 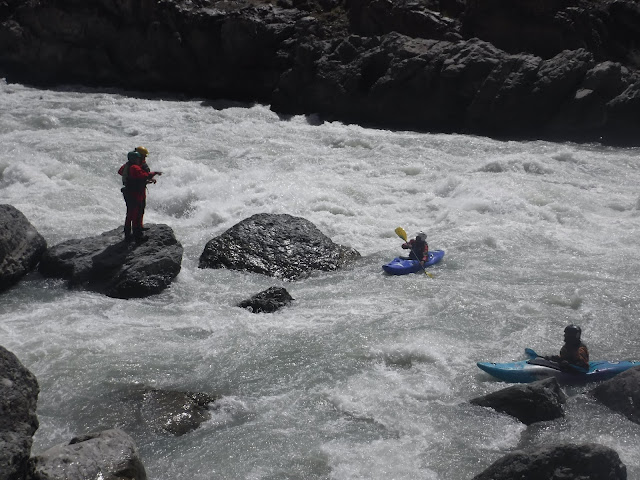 The workshop was a great successes for all involved. The IRF now has new provisional Instructors from Uk,
india &Russia.  We have a host of new trip leaders, guides and safety kayakers from India,Spain,Ecuador. A warm heart felt thanks to Chotak & the team from Wet n Wild explorations In leh India and to the candidates for making the workshop a great learning environment.
See you on the river
Mark